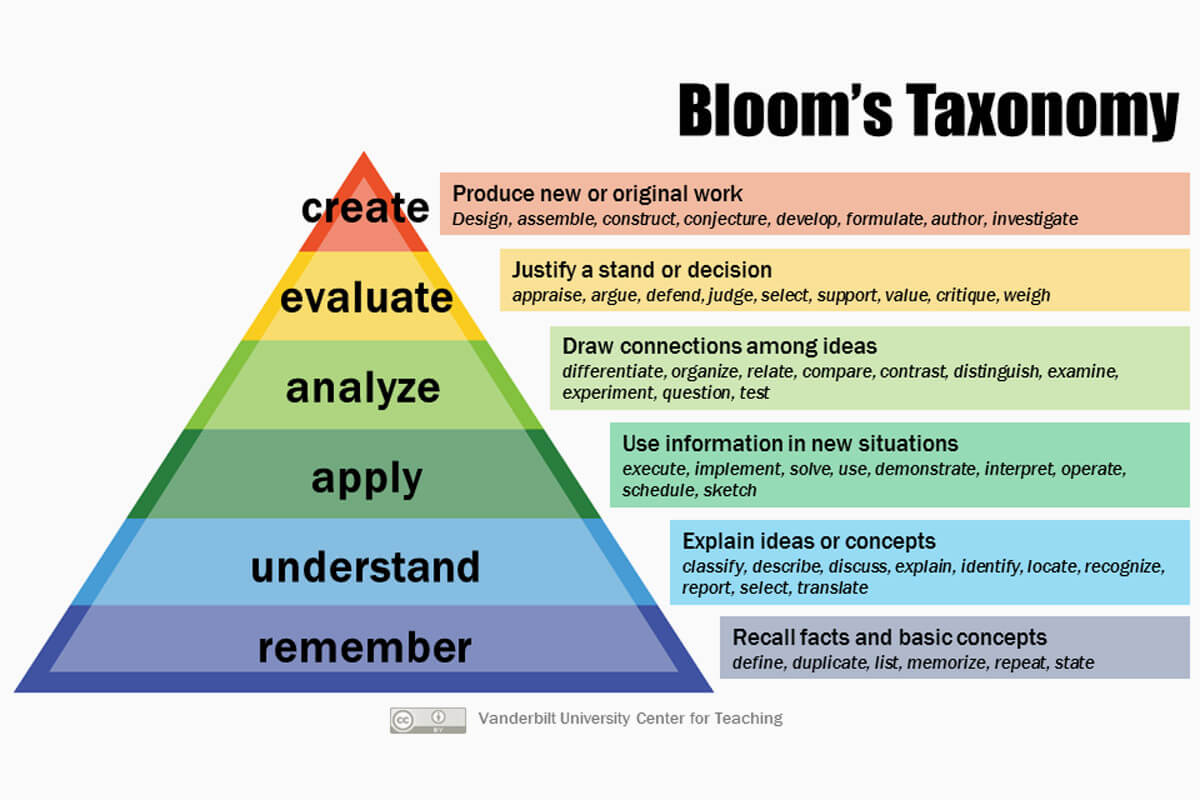 I have worked in Higher Education for a large portion of my career and used Bloom’s Taxonomy when writing curriculum and planning coursework. Bloom’s taxonomy was developed to provide a common competency in terms of six levels of work that students are able to perform. For example: a 1001-level course is a college freshman course and we might have an objective of remembering and understanding. While, a 5000-level course, typically at the senior in college level, may have the expectation of analysis, synthesis, and creating.

Bloom’s taxonomy was developed in 1956 and was named after Benjamin Bloom. Bloom worked at the University of Chicago, Illinois and chaired a committee of educators to develop a framework for educational achievement in which each level depends on the individual’s ability to successfully accomplish the one below. And, in fact, each of the six levels build on one another to prepare students for cognitive and critical thinking.

One day I began thinking about how this applies to my leadership and the skills of my team members. I began with the concept that I expect a certain competency level when I am hiring someone to fill a certain position. The competencies for each role are typically found in the job description and the expectations are known when the person is hired, expecting they possess those competencies. Then, the manager works with each person in to use their competencies towards achievement of their goals.

So how does this relate. I realized that as a leader, I began having the same expectations for all my direct reports and had an “aha” moment one day when I realized all my direct reports were actually all at different levels. While I might describe myself as a servant leader, transformational leader, or situational leader, there is something to be said about meeting people where they are. My direct reports were also struggling with this notion because they expected their team to have the same competencies, sense of urgency, that they had.

I grabbed Bloom’s Taxonomy and began a discussion regarding our employees. For example, I might need my Registrar to remember, understand and apply. While I need my Provost to analyze, evaluate and create. When I am frustrated that my Registrar is not at the same level as my Provost, I need to understand the role and the competency of that level within the organization.

I know this sounds like common sense. But in reality, how many of us do this?

How many times have you expected others to perform at the same level you do, or at the same level of others that are not at the same level within the organizational structure. Once I worked with my team to understand Bloom’s Taxonomy in terms of people skills and competencies, we would remind ourselves to ask the question, “what level are they at?” Understanding and using Bloom’s also worked well in terms of succession planning and performance management.

So, what is the lesson learned. Each person we manage is different and might also be at a different level according to their role in the organization. Just like with students we can’t create an arbitrary expectation and expect them to jump to reach it. We need to understand the level of an individual and work with them as they grow and develop to reach their potential. Leading our teams well requires us to get this right or we might have a great team member that we lose because we try and push them beyond their limits.

Dr. Goodwin is a sought-after executive in strategic development, culture and change management, employee engagement, higher education, and leadership development. She has helped transform organizational cultures creating opportunities for employees to do their best work and organizations to get their best results. Her educational background includes a Doctorate in Organizational Leadership, a Masters of Business Administration in Human Resources Management and a Bachelors of Art in Finance.

Latest from the Blog
Cart
Go to Top